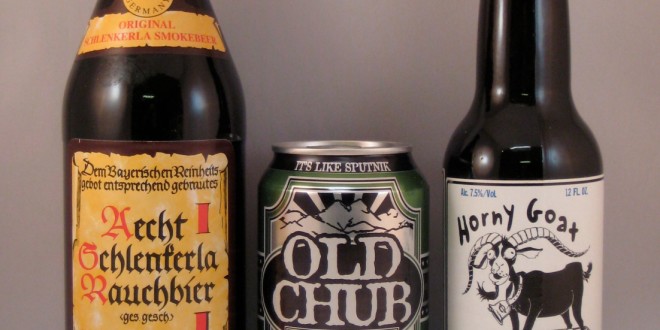 Aren’t spices, herbs & vegetables for cooking with? You’ve heard of smoked salmon, how about smoked beers? Are you a fan of the flavors oak imparts into beer such as vanilla? Read on to find out…

Previously we examined Spice/Herb/Vegetable Beers, in this article we will cover BJCP Category 22, Smoke-Flavored/Wood-Aged Beer, which includes the following Beer Styles:

First we will cover the history of the category, then take a look at the specifications of each style highlighting the similarities and differences. We then sample commercial examples of each style.

Rauchbiers (‘rauch’ is German for smoke) originate from the German city of Bamberg which is in the Franconia (Franken) region of Bavaria (Bayern). A Classic Rauchbier is a Märzen-style amber lager which is brewed with beechwood-smoked malted barley (according to the BJCP guidelines)*.

Historically German brewers have used smoked malts in beers other than Märzens to impart a smoky flavor – these include Bocks, Doppelbocks, Weizens, Dunkels, Schwartzbiers, Helles, and Pilsners. This approach has now been adopted by modern brewers in other countries and extended to beer styles such as Porters and Scotch Ales. These beers are collectively grouped together under the ‘Other Smoked Beer’ style.

Wood-Aged Beers are usually made by brewing a particular base style then placing it in an oak cask or barrel which may, or may not, have previously been used for the production of a wine, port or spirits such as whisky, bourbon, and brandy. A similar effect can also be obtained by aging a beer in a stainless steel vessel with oak chips, cubes or spirals.

Woods other than oak are also used to wood-age beer and impart different flavors. Wood-Aging is more typically carried out by Craft Breweries than large-scale Macro Breweries though this line is blurring as the larger producers have seen the popularity of Craft Beer grow over recent years.

According to Jamil Zainasheff in his book, Brewing Classic Styles, these beers should be as follows:

The following table* shows the characteristics of the three styles of Smoke-Flavored/Wood-Aged Beer:

The above table shows that only the Classic Rauchbier has specific starting & finishing gravities, alcohol content, bitterness, and color within the style guidelines. The other two styles depend on the base beer that is ‘smoked’ or ‘wood-aged’ and therefore the guidelines of the appropriate style apply.

Please note that the characteristics of the Wood-Aged Beer style is that the alcohol content tends to be above average and same goes for the starting gravity.

In the following sections we will look in more detail at each of the above Beer Styles.

Schlenkerla Rauchbier Märzen has the following characteristics which are within style for alcohol content and at the top of style for bitterness:

This beer is red in color with a white head that lasts a while. Subtle smoke in the aroma accompanied by some malt. Flavor is stronger smoke and slightly bitter. Moderate carbonation and a good mouth-feel with lasting smokiness.

Oskar Blues Old Chub Scotch Ale is based on a Scotch Strong Ale and has the following characteristics which are within style for alcohol content and bitterness:

This beer is dark red in color with a thick light-tan head. Aroma and flavor are of caramel though the flavor is also malty and syrupy. Carbonation is low and the moth-feel is somewhat thick with a sweet after-taste.

Boulevard Dark Truth Stout is based on a Russian Imperial Stout and has the following characteristics which are within style for alcohol content and bitterness:

This beer is black in color with a thick dark-tan head. Poured thick and syrupy. A dark caramel aroma. Flavor is initially sweet then treacle, liquorice and bitter with a smoky after-taste. Low carbonation and a very thick mouth-feel.

Schlenkerla Rauchbier Urbock is based on a Traditional Bock and has the following characteristics which is within style for alcohol content but too bitter:

This beer is red in color with a white head. Aroma has subtle smoke. Flavor is smokey with some sweetness from the Bock style. Moderate carbonation and a good mouth-feel with no smoke in the after-taste.

This beer is black in color with a tan head that goes quickly due to the alcohol content. A whisky aroma as is the flavor that is accompanied by whisky alcohol warmth. Low carbonation and a smooth mouth-feel.

John Henry Colonial Cream & Brown Ale has the following characteristics which are hard to compare to a given style due to them being a blend though the alcohol content is far higher than a Cream Ale (5.6% max) or an American Brown Ale (max 6.2%) but according to the style guidelines this is allowable:

This beer is brown in color with a slight head. A brandy and oak aroma. Flavor is creamy, bitter and of alcohol. Fine, below average carbonation with a medium mouth-feel.

Our next article will look at BJCP Category 23, ‘Specialty Beer‘, where we will examine the one style making up this category.

If you have any questions or comments about this article, please do not hesitate to contribute to the discussion below.