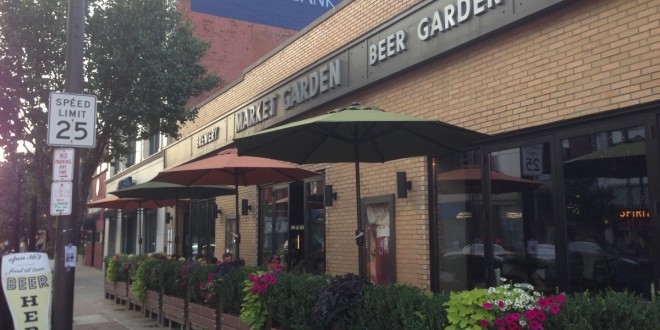 As our Summer Brewery Tour of Wisconsin started to draw to a close, we departed from Milwaukee and headed south around Chicago and onto Interstate 80 to head due east through Indiana towards Cleveland, Ohio.

Fortunately there were still a few more breweries to fit in so as an overnight stop we chose to stay in Lansing (Illinois) as it was only a few miles from a very well renowned brewery located just over the State border in the town of Munster (Indiana).

Three Floyds Brewing has a big reputation, partly due to their annual Dark Lord Day festival to celebrate the release of their Russian Style Imperial Stout, so we were very much looking forward to this visit.

We arrived at 5pm on the Saturday evening at their brewpub to find a dozen or so people hanging around outside. This seemed a little odd so we ventured inside to find that the wait time for a table was about an hour and that there was no way of getting a drink until we had a table.

Granted popular places can mean you need to wait for a table but what struck us was the rather abrupt manner of the member of staff who was seating people and taking names for those waiting! We headed back outside to loiter around for an hour until it was our time to be heckled in, rather than politely be called, as seemed to be the etiquette of the same said person…

As an aside I wonder what people do if it is raining, wait in their cars and give a license plate? We also noticed a side door where a bottle shop is located so beer can be purchased to go – they seemed to be reasonably busy.

Eventually we were called to be seated and could either order a four glass sampler of a fixed selection of beers or we could order by the pint or half-pint. Here is the selection of beers we tried between the group of us with tasting notes and rating out of five:

* denotes our favorites from the above selections.

The remainder of our experience was mixed – on the downside the table wait staff who was serving us drinks was no better than the person seating people but the person serving us food was much more polite. The food was extremely good with a focus on quality rather than quantity.

Our overall impression was that this brewpub is over-rated and due to the popularity they do not seem to see the need for decent levels of customer service as people will visit them anyway!

After a six hour drive we arrived in Cleveland where we visited Market Garden Brewery (MGB) for something to eat as well as ordering a comprehensive sampler whilst sat out on the back terrace enjoying a very pleasant summer’s evening.

The beers in this sampler comprised of the following:

* denotes our favorite from the above sampler.

Situated on the same block and owned by the same people as MGB is Nano Brew Cleveland which has a small brewing system located in a 9′ x 9′ space in the corner of the brewpub.

In addition to their own beers, and some from neighboring MGB, they also have a wide selection of Craft Beers from around the USA.

We opted to have the following sampler of their own beers first:

* denotes our favorites from the above flight.

We did not have any preference from the second flight.

After the flights we wanted a pint of Thunder Stout but strangely the brewpub would not serve this because it is 10% ABV so instead we ordered a flight of two beers which included this and another thus equating to a pint of the 10% beer anyway – very odd.

This is the end of the last article covering our brewery tour of Wisconsin. I hope you have enjoyed our articles and find them useful should you choose to visit any of the locations or breweries mentioned.

If you have any comments or questions on this article, or about the series of articles in general, then please do not hesitate to leave them below.