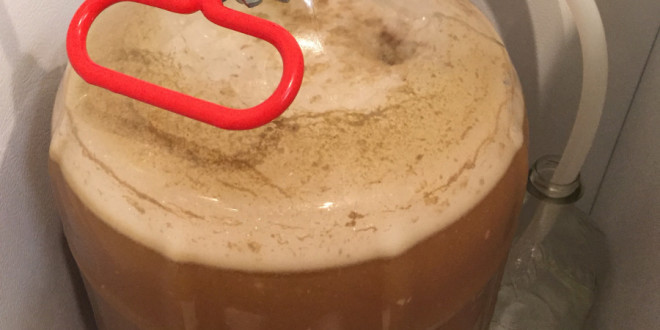 Previously in this series of articles on How to brew different Styles of Beer? we covered Brewing a Dunkels Weissbier, this time the Beer Style comes from the ‘Pale Bitter European Beer’ category in the BJCP 2014 Guidelines and is the style of a Kölsch.

In the following sections we are going to examine different aspects of this style such as its background, the style guidelines, ingredients used, sample recipes, brewing process, and finally the outcome of brewing a batch of this beer.

This beer derives its name from the city of Cologne (Köln) in Germany. Many people think of this style of beer as being a lager when in fact it is fermented with an ale yeast but if often lagered to help smooth out the flavors.

According to the BJCP 2014 Style Guidelines Kölsch is an appellation protected by the Kölsch Konvention (1986), and is restricted to the 20 or so breweries in and around Köln. The Konvention simply defines the beer as a

A step mash is traditionally used, although good results can be obtained using a single rest at 149  deg F. Fermentation is carried out at cool ale temperatures (59-68 deg F) and lagered for at least a month, although many Cologne brewers ferment at 70 deg F and lager for no more than two weeks.

In the BJCP 2008 Style Guidelines Kölsch was in the ‘Light Hybrid Beer’ category (see here), but now in the revised 2014 Guidelines the style has been grouped together in a new category with three other German beer styles as follows:

In the new guidelines the vital statistics of the Kölsch have only had one tweak which is to lower the bitterness starting range by two points:

According to the BJCP 2014 Guidelines the following are characteristic ingredients used in the brewing of a Kölsch:

Below are some recipes for 5 gallon batches of Kölsch from leading authors in the homebrewing community together with some analysis on how they comply with the style guidelines:

The recipe chosen for brewing this batch of Kölsch was Bambi’s Best Blonde Ale. Although the other two recipes are simpler and arguably have malt bills and hop choices that are closer to the style guidelines, the reason for my choice is because Randy Mosher’s recipe was used at a collaborative brew day at my homebrew club but with a lot of tweaking so I was intrigued to find out how a less modified version would turn out:

In the above recipe the Pale Crystal malt was omitted due to lack of availability and not being within the style guidelines, instead an extract half pound of Munich malt was substituted.

The 5 gallon batch of beer was brewed following these steps:

According to the style guidelines a Kölsch should have the following characteristics:

How did my batch of Kölsch turn out?

All the numbers were hit spot on target which in my mind is a sign of a good brew day! Here are the actual vital statistics:

The tasting notes are as follows:

Light straw in color with a slight haze and a white head. A slight citrus hop aroma. Flavor is hoppy then yeasty. Highly carbonated with a medium body.

Initially I was disappointed with the lack of clarity of this beer considering I had even done a Protein rest and used gelatine when cold crashing but after being bottled for a week or so it poured crystal clear and in my personal opinion tasted great. I am very happy with this beer and have entered into the National Homebrewers Competition 2015 so we will see how it scores. The only potential downside is not having had sufficient time to lager it…

In my next article in this series I will be examining Brewing an Altbier which is in the ‘Amber, Hoppy European Beer’ category so please check back for that article to be published.

This article is made possible by Brew-Boss, to find out more about Electric Brewing systems and configuration options offered by Brew-Boss please click on their logo to check them out.